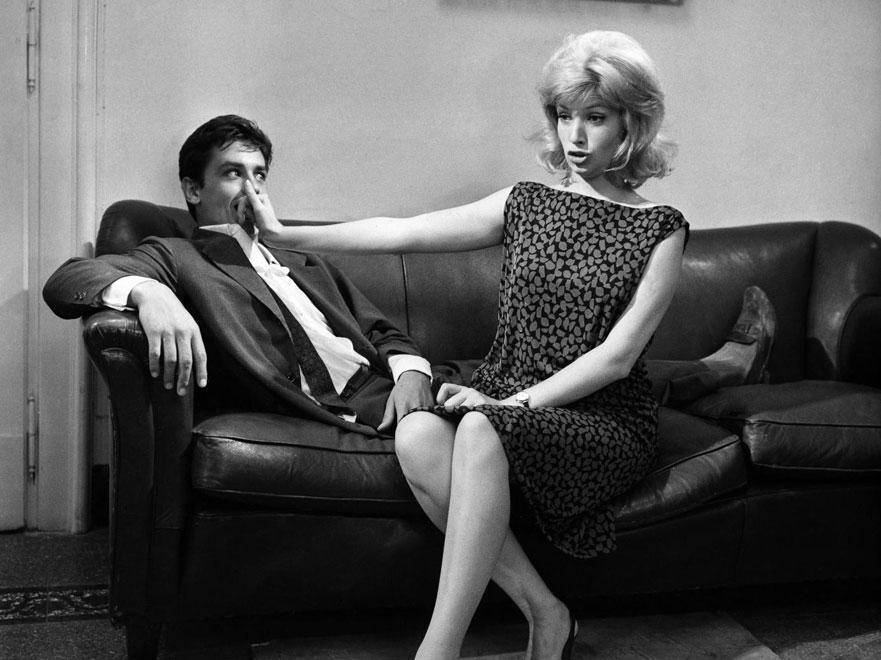 "I wish I didn't love you or that I loved you much more."

Rome, a metropolitan lovers city, sets the perfect backdrop for Michelangelo Antonioni’s masterpiece 'L’Eclisse'.  At surface level it’s a lingering gaze at the entirety of love. The look is more conceptual than based in the reality of our two integral lovers – Vittoria (Monica Vitti) & Piero (Alain Delon), with Antonioni consciously taking us on a journey through their evolving relationship, one which at its the heart is the modern tale of romance. And it stills holds true.

L'Eclisse has as much relevance today as it did on release, and why is this?

My bet is on the latter as the very idea two people with different constitutions & habitual hangups, as we all have, can actually come together & move toward a seamless future commands a disregard for common sense. It’s a flawed premise & L’Eclisse offers the comfort that love can never be simple, & if it is, is it love?

Well no, not if we buy what Antonioni proffers. Love shouldn’t be highs & lows with explosive cinematic fanfare & blown up gestures, but rather pain, consistency & a steady affection both nurtured & challenged.

Piero & Vittoria act as typecasts for the era.

They begin their lovers state of paralysis just as Vittoria has ended a former one. Vittoria's breakup with now former flare Riccardo is quickly welcomed by us thanks to the atmospheric coldness found in their sterile apartment. Yes, Vittoria is the modern fated femme, but just not as you’d expect.

She’s an impulsive romantic at heart who craves passion alongside emotional support. Yet she's immature & this is evident by her inability to voice why she needs to terminate things with Riccardo. It's then of course amplified by her dreadful display of blackface with friends Marta & Anita.

It's important to note the underlying repugnence Antonioni is voicing here toward cultural misappropriation in film & art at large.

As Vittoria paints her skin dark & dances in a makeshift African costume equipped with exaggerated jewels & a spear, it is painfully clear we're not on her side.

This is not a case akin to Fred Astaire's revolting 'Bojangles of Harlem' feature in "Swing Time".
Instead it's a gaudy display equipped with tense body language & uncomfortable glances issued by Marta, which are then heightened by the slightly offbeat, detached music.

Watching this scene left me uncomfortable, as it should do, & as Marta reprimands Vittoria, so do we.

We are left imploring Vittoria to grow the hell up. She does not of course because this is a tale of life & life lessons do not elicit an immediate learned reponse. Instead our naive femme continues her misplaced dreamer pursuits by impulsively jumping on a plane & then later on by bedding the objectively wrong for her Piero.

Meanwhile, Piero is a man of the times with his self absorbed, materialistic stockbroker typecasting.

He's flailing hands thrown around at large that are replicated by one and all in the thickly coated, profit seeking stock exchange room. Piero immediately voices the dollar value of every minute & we get it, he lacks emotinal depth.

But how can we ask he be anything else? His world is noisy, quick & requires capitalising on others failings. In fact Vittoria & Piero's sole commonality seems to be sex: which given the European constitution becomes weighted & yet equally beautiful as the film carries on.

Our lovers differences are notably reflected in the landscape.

Antonioni uses vertical lines amid deliberate architectural framings to physically distance the two during terse words. Each focal moment is matched by pillars, window frames & trees acting as a third, almost fatelike, party in our titular characters union, and yet Vittoria & Piero continue to pursue it.

In fact it's astonishing to realise the sheer influence 'L'Eclisse' has had on cinema to date with the timeless question being: Is the work required to sustain true love actually worth it?

With two sides to every moment & our subjective failings to immediately see outside our perspective, it is inevitable the very bad will come with the very good, just likely to a greater extent.It's just a question of whether you're able to stomach it.

Antonioni heightens this push | pull 'cat | mouse' game further by indulging focus on every ear, on every smile & on the pressed out cheeks readily welcoming a loving kiss.

I will not go into further details to avoid unnecessary spoilers but there’s obvious affection here for Vittoria & Piero with a stark lustfulnesss & childlike joy of a together future existing between them.

Despite the heavy hitting subtleties, L'Eclisse at it's core is playful, which is why I'd argue it continues to carry timeless weight & hit our heart strings to such a hefty degree.

What we get here is a tale of life amidst the continuation of social mundanity. Lives carry on, as they always do, & our lovers are but a spec of nothingness, irrelevant to all but themselves & those they encounter. Antonioni's curated scenes create an almost haunting detachment from love which somehow maintains beauty & respect. This is especially true in the hyper charge world of romantic pursuits.

So I suggest you watch 'L'Eclisse' this weekend. I promise you won't regret it, even if it's just to contextually understand the significance it's played on cinema as we now know it.